'Keep me alive through music.” requested the legendary Bob Marley before his untimely passing in 1981.  He'd be proud to know that the legendary Wailers did just that when they played Rock City Nottingham as part of a 14 date tour.

Continuing their quest to bring reggae to the forefront of the world's stage.  Led by renowned bassist and founder Aston "Familyman" Barrett, and joined by original Wailers guitarist Donald Kinsey as well as saxophonist Glen DaCosta, the group gave the audience an authentic experience of their unique, timeless and innovative sound. No gimmicks, no attempt to remix or update, just classic and timeless music.

It's feel good music in abundance which makes the listener dream of foreign shores, chilling on a beach.  Mid way through the set, in my head I'd booked a holiday. I'd give them 10 out of ten for escapism alone.  The album, Legend, should be given on prescription by the NHS in the ideal world.

Now lets address the elephant in the room. How can you have The Wailers without the iconic Bob Marley? Some have criticised them for being no more than a tribute band, which is unfair, but of course from 1972 to 1980, Bob Marley & The Wailers recorded, toured, and performed before countless millions worldwide.  It is his voice that is known. The ineviable task of taking on those legendary vocals falls to Joshua David Barrett, Rastaman by lifestyle and culture, who delivers Bob’s powerful message of Jah love and unity through his performance and interaction with the audience, delivering a faultless performance which Marley would be proud of while adding an edge of youth.

Familyman has carried on the mission to "keep The Wailers together" since 1981 just as Bob requested.

In tribute to the late co-founder and drummer Carlton “Carly” Barrett,  Familyman’s multi-talented son, Aston Barrett Jr.  delivers with his uncle’s inspiring landmark “one drop” drumming style. Also joining them is background singer Shema McGregor, daughter of I Three singer Judy Mowatt and Reggae pioneer Freddie McGregor. Sound engineer, Christian Cowlin, a Wailers Band veteran who traveled the world with them for more than 20 years is responsible for the band’s live sound and keeps it authentic. 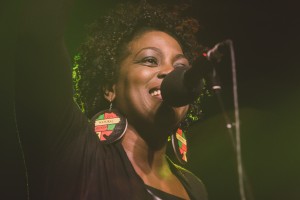 In a slice of music history, we were treated to the classics. Three Little Birds/One Love has the crowd singing along, as does I Shot the Sheriff, Jammin/Get Up. We sway in unison to No Woman No Cry.

The legend of Marley definitely lives on.

Disclaimer: My tickets were gifted but my views are my own